The Inverted Yield Curve of March 22, 2019, is YOUR FRIENDLY REMINDER to purchase your income guarantee sooner rather than later.

Innuendo in today’s title notwithstanding, on Friday, March 22, 2019, money watchers worldwide made a note of the unique anomaly of the “inverted yield curve” which appeared for the first time since 2007 at the close of business day.

Traditionally, bond yields are higher for investors who hold for longer maturities. This makes sense because an investor is taking a risk that inflation will not have eroded his purchasing power when his bond comes due. Therefore, the bond is only attractive to purchasers if the yield makes it so.

Conversely, shorter-term maturities pay the bond investor less, since the investor is taking less inflation risk so that he/she can recoup funds sooner prior to inflation extending its dark hand.

When increasing numbers of investors are purchasing bonds of shorter maturities, it signals a growing consensus amongst investors that longer-term growth is likely not to materialize. One of the side effects of higher demand for bonds, in general, is that the yields on these instruments must fall. As of the time of this writing, the 10-year Treasury has sunk to 2.43% from 3.20% of last year, a drop of about 23%.

When the long term bond yield actually falls to a threshold below what the short term T bills pay, for example, this represents an “inverted yield curve” – which is a phenomenon that most academics and nerds of the greenback have agreed is a signal that the economy will be slowing in more or less than one year. A slowing economy, of course, is called a recession.

In fact, of the last 7 recessions, every single one of them has been preceded by this inversion phenomena. See chart below (courtesy of Bianco Research):

How Long Until the Next Recession? 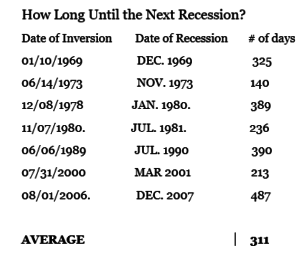 So, it appears as if there may be a recession around the corner. Should you wait till the midnight hour before you buy your annuity income plan, or should you hedge your bets and lock and load while you can? After all, there may still be some growth left till that “midnight hour.”

Of course, there is no predictable answer to the question, but it might be prudent to recognize that “deferral credits” are a part of every insurance company’s calculation of lifetime income benefits.

When you buy a deferred annuity, the insurance company measures the date that you open your account until the date that you start taking lifetime income. The longer that distance is between these two endpoints, the larger your income guarantee will be. And this reality of the insurance world creates an interesting point of decision for the investor.

If you open an annuity today, for example, with the goal of starting income in one year, the insurance company is going to give you what are known in the industry as “longevity credits” for that year of deferral so that your lifetime payment in writing will be higher next year than it will be today.

Longevity credits are essentially written income benefits that increase as you age and hold money with insurance companies. These credits are applied even if there is zero growth (or even a loss in the market for that matter) over the next 12 months while you hold your funds with the insurance company.

In other words, you can “lock in” your pension guarantee, in advance of actually taking it, and it will remain valid even if the market were to disappoint over the time period that you are not using the funds in your annuity.

The parallel reality to this is if you did not buy the annuity today and opted instead to “white knuckle” it with the express purpose of extracting the last vestiges of this bull market economy till that “midnight hour.” You only have a certain chance (let’s say 50%) of depositing more money, from growth, into your annuity policy (this is good) – and a certain chance (let’s say 50%) of depositing less money, from loss, into your annuity contract.

Since you are still starting the income guarantees 12 months from now (whether you fund the annuity now or fund it 12 months from now), then you only have a 50% chance of getting higher income. It is a wager you may not wish to take.

After all, if you were flying on vacation and as you sat in your seat before takeoff the pilot were to announce over the loudspeaker that you only have a 50% chance of arriving at your destination, you might be inclined to exit the plane before it took off.

The conundrum of insurance guarantees. They are always better the earlier you get them.