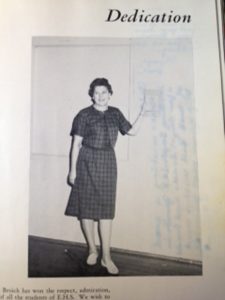 My mother had the 1963 Emmett High School Album dedicated to her.

My mother was a spectacular woman. Smart, funny, and notoriously happy. She was born before the sailing of the Titanic, raised by a thoughtful mother and father with her six sisters, who grew up with Midwest heritage. She fought her way through the depression earning a college degree and a lifetime profession as an educator. She married once to the man of her dreams and raised four children while working full time as a teacher, a consummate volunteer for any good cause.

I could share many memories of my mother; I could tell you of her many accomplishments and of her lifetime devotion to helping others. Her life is a story of happiness, commitment to faith and family, and a lifetime of helping others.

Instead, I will share with you my very favorite story, a story not of a happy event but one who tells who she was and why after so many years since she passed, she is still a factor in so many lives.

This is a true story.

I was 14 years old, full of myself and as obnoxious as any teenage boy could be — the world as they say “revolved” around me. But that year, 1963 and event happened that still is with me and one that defines my memories of my mother. I wonder how many times I have made a decision based on that event, many I would say. It was a lesson for life, an experience that can only be taught by example.

Now at age 72, I think of that event often, and when I have found myself in a similar situation, I think: What would mom do? The event in itself is a simple story, but the message is as enormous as anything anyone could ever write.

Think of 1963, a simple time it was, Viet Nam was only a blip, the moon had not been touched, no cable TV, no internet, simple and happy. The world was also getting smaller, the airlines were evolving, and the new choice for air travel was a jet. Pan Am ruled the skies and was the king of the hill, the epitome of cool. Pan Am flight attendants were the dream of many a teenage boy (and many men), so adorable and so darn cute, what we wouldn’t have given to be with one.

Emmett Idaho was very poor; of course, none of us ever knew it. There was always enough food; we still had a warm home and parents who came home at night. We walked to school, played sports, and hung out with our friends. Nearly a perfect life.

As a teenage boy, it was my heritage and duty to be completely self-absorbed, to ridicule anyone or anything that we perceived as not cool. That included picking on those not in our cool “caste” system. My story hinges on the arrogant and conceited nature of a teenage boy from Emmett Idaho.

There was one girl in the class, a year ahead of me, who we especially picked on. Her hair was always full of uncombable knots; her clothes were the target of many of our jokes. She was dirty, unwashed, and un-kept. As it turned out, she was very poor, living in a shack by the river without even the benefit of running water or floors. That is right; they had dirt floors in their family home.

Can you imagine being that girl, the target of relentless teasing, no money, dirty, no possible chance of ever becoming anything, she was one of the untouchables. I have thought about providing you with her real name, and I looked her up in my 1963 Emmett High School Album. Having to imagine how she felt, many memories came flooding back about those times and what it must have been like living in extreme poverty and without hope.

Did I say without hope? Yes, I did, but she wasn’t hopeless, she had a dream. She wanted to be a flight attendant for Pan Am, that was her dream. A simple dose of reality would tell all of us that she had no chance, ever. She would no more be hired by a prestigious airline like Pan Am as flying to the moon. She was dirty, and she had no hope.

My mother was teaching typing at the time, and she would move back and forth from typing to teaching English. I noticed the “girl” at our home a couple of times, but being so self-centered, I merely ignored her. One day as I was coming home, she was leaving my house. My mother was at the dining room table, finishing typing a letter, a letter to Pan Am.

The letter was to ask how to become a stewardess, how to join Pan Am. My mother had written the letter on her behalf, trying to help the girl laden with misery. They had been meeting and discussing how to write the letter and where to send it. My mother even put the stamp on the envelope.

In a moment of complete teenage idiocy, I said to my mom, “Why would you help someone like her; she is so dirty and disgusting.”

My mother took a deep breath and, with a few simple words, changed how I now look at life, an answer so profound that in its simplicity, it is overpowering.

With those simple words she had cut me to the quick, she had given me a life plan that cannot be learned at any school.

The internet is really something. It is the source of so much information and a terrific place to do research. Just for the heck of it, I searched for the girl’s name, and guess what, she was listed on http://www.onegreatfamily.com. There she was, and for only $4.95 I could find out all about her, I could end my story. Out came my Visa and in went the research.

I found her and read about her story, sadly she has passed away, but she did have a photo montage of her life. Listed below is the photo of her graduating class in 1967, as a Pan Am Flight Attendant.

You can pick her out, right? She is no longer the dirty one, mocked in the past. 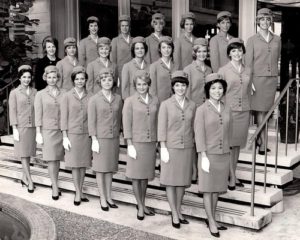