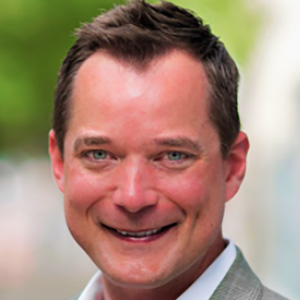 Martin Becker
Marty specializes in helping his clients take control of their finances and reaching their goals without taking unnecessary risk. Being the owner of Atlas Financial Strategies, and an independent producer, he has contracts with multiple companies unlike the average financial planner. Website: atlasfinancialinc.com

In 1994, William Bengen published an article in the Journal of Financial Planning.

He aimed to present his research from the Monte-Carlo Simulations he created and what an acceptable withdraw rate would be for someone with a retirement horizon of 30 years. Bengen knew that it was dangerous for retirees to assume a withdrawal rate of 7% – 8% of their assets while invested in volatile markets. Even though the market has averaged 7% – 8%, he knew of the Sequence of Returns Risk. What that means is depending on what the market returns, and when it returns it, can be either extremely beneficial for an investor, or it can have devastating consequences for someone relying on that money to last them the rest of their lives in retirement. 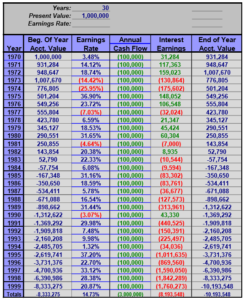 Why did this person run out of money after 14 years, even though the actual return was higher than their withdrawal rate? Because of the Sequence of Returns. This, in my opinion, is one of the most dangerous scenarios that retirees will face in our volatile times. What was Bengen’s suggested withdrawal rate? With his simulations, he found a 4% withdraw rate, with adjustments for inflation, should give a person a 94% chance of their money lasting them 30 years. The “4% Rule” was born and has been the standard go-to for financial planners ever since.

How’s that working out?

Let’s say the same person from our example above, was retiring in the year 2000 and used the “4% Rule” with an inflation adjustment of 2.5% per year, and a management fee of 1.5%. You can see that at the end of 2018, this person would have been almost out of money. 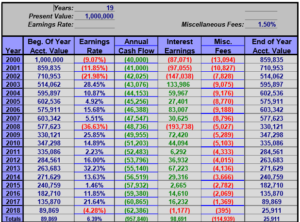 But you may ask, “isn’t this why we have a diversified portfolio of stocks, bonds, and mutual funds?”  To mitigate large losses from the market?” That’s exactly why. Here’s the problem, though. The ‘4% Rule’ was tested in an era of much higher interest rates.

According to Dr. Wade Phau, a 50/50 split of stocks and bonds will only give you a 69% chance of your money lasting you 30 years, versus the original 94% chance of success.

So, what is the solution? Unfortunately, it’s a lose-lose. Again, according to Dr. Wade Phau, you can increase the allocation to stocks and HOPE for a better return which would allow for a higher withdraw rate, or you can reduce your spending to 3% or your total portfolio, minus 0.5% for every 1% in fees that you are paying.

Where does either one of these scenarios lead? An unrealized retirement! You will either spend less money to avoid the sequence of return risk, basically “unliving” your retirement. Or, you will spend too much and possibly put yourself in a scenario of a “reverse legacy” while depending on others for financial assistance. I have never had a client describe this type of outcome as the retirement they have been dreaming about and working towards their entire adult life.

You may be reading this and feeling discouraged. Don’t be!

There is a solution that could give you a higher payout rate than the current recommendation of a traditional retirement plan if you and your spouse are over the age of 60. Plus, you will have guarantees to never lose money due to a market downturn, the potential for growth, and income for the rest of your lives, no matter how long you live!