Promises And Guarantees Are Not The Same Thing - Annuity.com 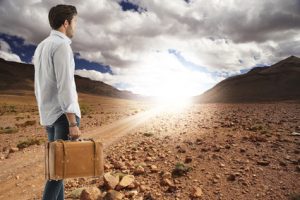 In the old movie, The Road to Morocco, Bing Crosby and Bob Hope show their pure comedic brilliance.  One of the best parts of the movie is when they become lost in a Moroccan desert and see a mirage, the outcome is hilarious.  Of course, the illusion is not real, and they end up quite delirious until their co-star, Dorothy Lamour saves them.

Investors, at times, can also become delirious, delirious to the point they make stupid and uninformed decisions because of the mirage of earning potential overplays the reality of the situation. Recently, a company was selling “mirage” interest rate products far above the market; the assumption was the interest rates offered were at “no risk.” investment options.  The company promised interest rates of 6% and higher, rates that as an assumed no risk product is not reasonable in today’s market.

A few days ago, that company, Woodbridge Group, filed for chapter 11 bankruptcy amid the departure of its CEO, Robert Shapiro, and an investigation of securities fraud.

The sad trail that Woodbridge leaves behind is not just losses from real estate speculators but instead significant earned interest dividends from many older adults who believed and trusted the company’s promises.

Under investigation by the Securities and Exchange Commission (SEC), the company was unable to continue in its current form. Chapter 11 bankruptcy is a reorganization of company assets with the bankruptcy trustee working to salvage either the business or the assets.  Through company papers filed with the bankruptcy court, the company had raised more than a $1 billion in cash, had remaining assets of $650 million and $750 million of debt.

What has happened to the other $350 million?

The mirage of unrealistic gains coupled with a slick marketing approach has once again caused pain and suffering to the most gullible. Not only did the elderly trust, because they wanted to trust, has left them without their invested assets and the reality of waiting for years for the courts to catch up.

Anything too good to believe is just that, not believable.

Here is the link to Bloomberg:  https://www.bloomberg.com/news/articles/2017-12-04/woodbridge-group-of-companies-files-for-bankruptcy-in-delaware