No one knows how to time the stock market, no one! 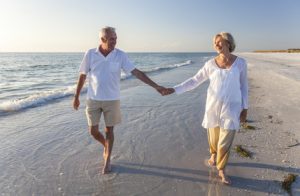 Do you know what the Stock Market crashes of 2001, 2008, and 2020 have in common? No one saw them coming. Things were rocking and rolling. The economy was excellent! Unemployment was low. Morale was strong! And then, virtually overnight: The Stock Market crashed – leaving millions and millions of people financially and emotionally devastated.

In the last week of February 2020, a major, world-wide crisis started staring everyone in the face. It was called the Coronvirus (COVID-19). And in just 23 days of trading, from February 20th through March 20th, 2020, the Dow Jones dropped more than 11,000 pts and was down more than 36% from the all-time high set in early 2020. If you were invested in the stock market or any other variable account that does not protect your principal, you probably lost more than 30+% of your account values, and you know just how painful and frightening this was. This is especially true if you were already retired or planning to retire soon.

During the first week of March 2020, before most airline travel in the U.S. came to a virtual halt, I was in Denver, Colorado, for a national conference. This was an extraordinary conference for 200 of the top financial advisors in the United States. While I was there, I was blessed to spend two days with America’s IRA Expert, Ed Slott. I had several one on one conversations with Ed and even had a 45-minute interview with him which has aired on Safe Money Radio and can be viewed on YouTube. During the interview, we talked in-depth about the SECURE Act, which President Trump signed into law in December of 2019. We also talked about the Coronavirus and how it was impacting the markets and our world-wide economy at that time.

Ed was one of the keynote speakers at the conference, and just before we walked up on stage for me to introduce him, he was on his cell phone interviewing with CNBC. They called Ed because the markets were crashing, and they wanted his opinion regarding the current state of the economy and how it was being affected by the Coronavirus outbreak. During his talk to the financial advisors in Denver, he mentioned the extreme VOLATILITY of the markets. The day he spoke, the Dow dropped -970 pts. But that was just a drop in the bucket compared to what it did during 23 consecutive days of trading from late February 20th – March 20th, 2020.

When it comes to retirement planning, one of the most difficult challenges retirees face is coming up with an income plan that will last the rest of their lives. People simply cannot afford to base this plan on an advisor’s opinion or the history of the past performance of some index or investment. It must be based on guarantees. As I’ve already stated, life can change in the blink of an eye, and those changes can be devastating.

Those who are entering retirement in today’s world face several different risk factors. These risks can turn your retirement plan upside down and quickly. These risks include longevity risk, health risk, inflation risk, and market volatility risk. Years ago, I wrote about something I call the TRIPLE WHAMMY in retirement. In my opinion, this is the greatest risk every retiree faces today. The triple whammy is very simple. Once you retire, if you start taking distributions from your retirement account, and experience market or volatility losses in that account at the same time you are taking the distributions, while paying someone a fee to manage that account, you will end up upside down in your account so fast, it will make your head spin. In a nutshell, this is the triple whammy:

Distributions + Losses + Fees = Retirement Disaster. I teach retirees how to avoid the triple whammy at all costs!

When Ed Slott, America’s IRA expert, spoke to the nation-wide group of financial advisors on March 5th, 2020, in Denver, Colorado, he reminded them that he speaks to retirees across the country. Ed has been the host of five different shows on PBS over the years, and his 2020 show is titled “Retire Safe and Secure.” It is safe to say that Ed has his finger on the pulse of today’s retirement crowd. And he reminded the group of national advisors that today’s retiree is not looking for the next hot stock or the next trendy investment idea.

Ed Slott said, “the average retiree’s #1 purpose is to PROTECT what they have spent their entire life earning.” He said they don’t ever want to run out of money. Ed reminded everyone that his mother, who recently passed away, had spent the remainder of her years with guaranteed lifetime income that came in every single month from an annuity she owned, and this money kept coming in no matter what the markets did. He said she was so proud of the fact that she had protected her money, which meant she would never be a burden on her children. Even when she was in the hospital in her last days, Ed said she would always tell him to make sure she was still getting her checks. And then he laughed and said he would take the canceled checks to her and show her the money was still coming in month after month.

Ed Slott is a CPA. He doesn’t sell stocks, bonds, mutual funds, annuities, or life insurance. Ed doesn’t sell anything. He advises people about taxes, and he is the nation’s leading expert on IRA’s and 401ks. You can read his articles and interviews in The Wall Street Journal, the Washington Post, Fox Business, Barron’s, Morningstar, Yahoo Finance, USA Today, Forbes, and in many other locations. Ed is very open about what he has done with his own personal investing. In 2010, he converted all his tax-deferred accounts to ROTH IRAs. He also owns cash value life insurance and annuities.

Do you know why these three things are so powerful when they are combined in your financial plan? It’s because you are deciding to get rid of the taxman upfront at historically low tax rates. When you convert your IRA to a ROTH IRA, you are paying the tax now. That means all future growth is tax-free. It also means that all future income payments from that ROTH account will be tax-free. Ed said, “I will tell you exactly how much money I have in my IRA – ZERO. The balance is ZERO because I converted all of my IRA to a ROTH.” When you combine ROTH IRAs, cash value life insurance and annuities, you can know with absolute certainty that 100% of your future income will be tax-free! And to add icing to the cake, you are making sure your heirs will receive 100% of their inheritance tax-free. That is the best retirement income plan you can have – one that is guaranteed and forever tax-free.

I have spent the past several years converting my tax-deferred accounts to ROTH IRAs. I own ten life insurance policies. I also own five Fixed Indexed Annuities, and these accounts will guarantee my family and me 100% principal protection and income for the rest of our lives. Why did I do this? If it’s good enough for Ed Slott, a CPA, and America’s IRA expert, then it’s good enough for me. And when the stock market dropped over 11,000 points in just 23 days of trading in March of 2020, I didn’t lose ONE SINGLE PENNY of my hard-earned money. And neither did any of my clients.

When you use the right type of accounts, like fixed indexed annuities, income annuities, and specific types of permanent life insurance, you are spreading the financial risk among an extensive group of people. This allows multi-billion-dollar insurance companies the ability to offer the owners of these contracts various types of guarantees. This concept isn’t new. This has been happening for hundreds of years. One of the most powerful benefits companies have offered retirees in recent years is the option to choose lifetime income through what is called lifetime income benefit riders, also known as guaranteed lifetime withdrawal benefits.

When you combine the power of these accounts with income riders, you can accomplish various retirement planning goals at the same time. This includes things like securing guaranteed lifetime income, passing lifetime income to a spouse, avoiding longevity risk, protecting yourself from the risk of market volatility, and estate planning. The different investing options inside these accounts allow for guaranteed fixed returns as well as potential gains tied to various indexes like the Dow or S&P 500. Indexed accounts, like Fixed Indexed Annuities and certain types of life insurance, offer annual returns, up to certain caps rates, and participation rates, which are based on the index of your choice. Your principal will remain protected no matter what happens within that index in any given year, and in many cases, you can take advantage of guaranteed income streams you can never outlive. When structured correctly, they can even provide tax-free lifetime income and tax-free inheritance to your heirs.

Accounts that protect your principal truly shine when the markets are crashing. In early 2020, I received multiple messages from clients who simply wanted to say, “Thank you so much for putting our retirement money in accounts that protect us against losses and fees.” At the end of March 2020, when the market had dropped more than 30%, I received an email from a client who said, “Brad, I just want to thank you for all you’ve done for my family. You may not know this, but you help us sleep better at night. Thank you so much.” Just because you’ve never heard of something it doesn’t mean it doesn’t exist. It just means you’ve never be told about it. Safety, guarantees and lifetime income is available to anyone who wants it.

Warren Buffet said: “Only when the tide goes out do you discover who’s been swimming naked.”

In the Spring of 2020, when the stock market crashed, many people were invested in accounts that exposed the reality of their situation, and they were caught with their retirement pants down. When the markets are riding the waves of all-time highs, everyone looks like a genius. When the markets take 30+% drops as they did in 2020, you quickly see who wasn’t protected!

Don’t get caught without trunks on! Protect yourself and your family with accounts that protect 100% of your principal no matter what happens in the markets. Make sure these accounts offer you the guaranteed lifetime income you can never outlive. You’ll be so glad you did and so will those you love most!

About the Author: Brad Pistole

Brad is a Certified Financial Fiduciary® (CFF). He has been recognized with Ed Slott and Company as a Master Elite IRA Advisor from 2010-present. He has also been a member of the MDRT – Million Dollar Round Table "The Premier Association of Financial Professionals" from 2011-present. He was awarded "Top of the Table" honors in 2015-2020. He was the 2018 Safe Money Radio Advisor of the Year. Websites: guaranteedsafemoney.com | bradpistole.retirevillage.com