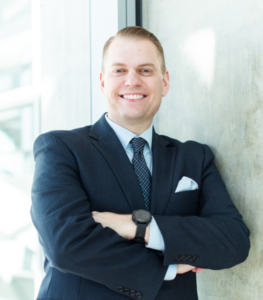 Anthony Owen, owner, and CEO of Annuity Agents Alliance recently named Derek Easdon to Vice President of agency services. With over 10 years of experience in annuity & insurance sales, Derek brings his depth of knowledge and experience uniquely allows him to assist his agents, and their clients, to achieve their financial goals. He thrives on helping agents with case design and marketing so they can realize their fullest potential in building their businesses.

Derek was raised in Thornton, CO, and attended Metropolitan State University in Denver majoring in finance. Derek and Rachel are the proud parents of 3 adorable children and spend as much time as possible with their family enjoying the great outdoors by riding bicycles, hiking, camping, fishing, and hunting.

Derek has been associated with the American Diabetes Association in several charitable events, including the Tour de Cure, The Davis Phinney Foundation Copper Triangle, and various other charity rides.

Derek is active in his church as well as numerous other organizations including the Boy Scouts of America where he obtained his Eagle Scout designation.  Derek has been in the insurance and finance industry since 2010 and holds his FINRA Series 6, 7, 63, and 66.

He has gained experience throughout the years working for companies such as Country Financial, MetLife, and Charles Schwab & Co. Inc.