4% Rule or Annuity for Peace of Mind in Retirement

Now that sounds like a very sensible statement; however, from speaking with so many people over the years, including callers on my radio show who have heard me talk about this, it is clear that this concept does not seem to register with many people when it comes to their own money. To not have to worry about money is everyone’s goal, I would imagine, but survey after survey has shown that running out of money in retirement is the most significant concern of retirees than dying! So, where is the disconnect coming from?

The most significant change that has come about in retirement planning in our lifetimes has been the switch from Defined Benefit Plans (Pensions) to Defined Contribution Plans (401K, 403b, etc.). Today there are very few people who have a pension. Instead, most people contribute to their company or government retirement plans. We have been told that is the best way to prepare for the time we are no longer working. But is it?

A recent study quoted from MetLife found that 21% of respondents who had taken a lump sum rather than an annuity had depleted all their retirement funds within five and one-half years. Another 35% still had some left worried that it would run out! By contrast, 91% of those who opted for an annuity felt they were financially secure. (2)

Almost everyone you speak with agrees they want their Social Security check to be there, and those with Pensions expect their review to be there monthly. These are looked at as income streams that they are entitled to, and they are. But 401Ks and IRAs are supposed to do the same thing- create income for the retirement years when we are no longer working. When we are in our working years, we contribute to these programs for the express purpose of being able to use them in retirement.

On my radio show, I have asked what the purpose of money is, and the answer is that there are only two purposes- for life or death! What do I mean by that? Well, if we are spending our money when we are alive, that is income, and if we are not spending it but want to pass it on to our heirs, then that is for death or legacy. The problem arises from the shift in outlook we need to have once we retire. In our working years, we want our money to grow, but we need to switch to the distribution phase once we retire. That can be difficult as we have been accustomed to watching our money grow, and then there is a fear of using it. Dr. Michael Finke, CFP®, Chief Academic Officer at The American College of Financial Services, explains the critical difference between wealth and income. He states people have trouble spending their assets but not their income. To quote him directly: “Once we start viewing money as wealth, as a stock of money and not necessarily as a flow, then we seem to get less happiness out of spending it than we do from money that’s automatically turned into a flow” (3).

The biggest problem that people face who have only a certain amount of money to live on for the rest of their lives is making the transition to seeing it as income- even though they want it to produce income. They don’t know how long they will live and fear giving up any of their nest egg in case they might need them for something else. But at the same time, they worry that they could take another 40-50% hit like many of them did in 2001-2002 and again in 2008 and had their retirement destroyed. Financial Advisors often refer to the 4% Rule as a safe way to draw income from a lump sum accumulated at retirement. Still, even that has been reduced in some studies to as low as 2.8%.4.  And with the market at all-time highs and eight straight-up years, can we count on the 4% Rule? Looking at the Dow Charts over the last 100 years, there have been long recovery periods from some of the Bear Markets it has experienced- as long as 16 to 25 years! (5).

So, to conclude- for most people to be happy in retirement, there needs to be a transition in their thinking away from the constant refrain of market-based Financial Advisors focused exclusively on accumulation and growth to understand the need to shift to distribution as income as we move into the retirement years. Remember, I stated the purpose of money is either life or death. I’d like to explain with a simple analogy. If you planted an apple tree in your yard and someone asked you what the purpose of that tree was, would you say, “To Grow,” or would you say to produce the apples that you would enjoy eating a few years later when the tree had matured? You might want to share some of those apples with your family and friends, but the last thing you would like would be for the tree to grow and then have the fruit whither on the vine and have no one enjoy it. Growth is the function of getting to the purpose of the tree, which is to enjoy the apples, and it is the same thing with your “money tree”– growing your money is only the function to be able to use it later. 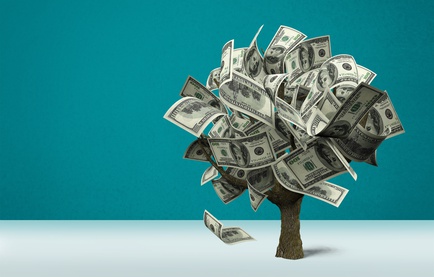 Now one more concept using that same analogy- when you plant that tree, you hope it will grow into a big, strong tree and produce a lot of fruit, but you don’t know if that will happen. Along the way, many things could affect the tree’s growth- there could be storms, winds, accidents, or maybe some disease that strikes the tree even after you’ve started enjoying the fruit, and then it stops producing it entirely. Of course, this is to suggest that there is plenty of risks leaving your money exposed to the market risk.

Unfortunately, we don’t have any way of protecting the apple tree from the forces of Nature that could occur, but we can save our money from the same dangers to our retirement planning. Rather than putting our money at risk in the market and not knowing what we may end up with or how long our money will last, doesn’t it make more sense to protect it from market downturns? We can lock in gains from the market when they occur and not worry about losing them the following year. But the market has only averaged slightly over 3% (3.115%) a year since May 2000 6. We are now in the 9th year of a Bull Market, so we don’t want to rely on market returns to grow our money tree. Using income riders, we can have guaranteed growth for income as high as 7% compounded interest a year without any market risk. This will also create a lifetime of guaranteed income significantly higher than the 4% Rule, allowing for it to be as high as 7-8% a year without any fear of running out of money.

Now that’s what makes people happy-try it- you’ll like it!